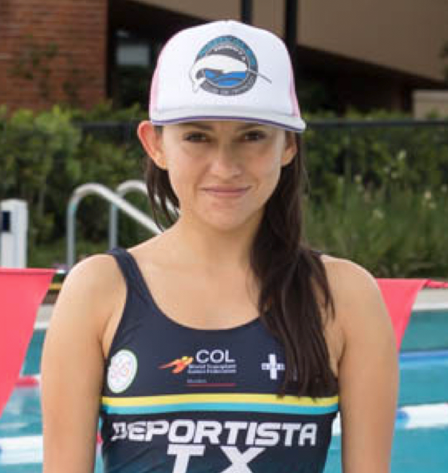 Sonia received her kidney and pancreas transplant on 25 December 2012, and with that felt a new opportunity had invaded her body. There was brightness in her eyes, a constant spontaneous smile on her face, and her body and soul were surrounded by an amazing feeling of peace and the ability to cope with life.

Sonia had been working through social networks and various public spaces to promote organ and tissue donation when she learnt about the World Transplant Games, which would be held in Mar Del Plata, Argentina in 2015. She planned to attend the congress, which would run alongside the Games. She travelled alone and recalls the emotion she experiences when witnessing the games.

The first competition she attended was the swimming. It was thrilling and fun and she believed that she was

not an active athlete, but seeing the other participate, she had hope that she could also. After meeting the Director of the Colombian Association of transplanted athletes, she was told “you can if you believe you can” and that sport welcomes everyone. This was already evident in the 1200 transplanted athletes from 44 countries and their companions who already believed in this and were participating.

Today Sonia is swimming regularly and training. Swimming has helped her overcome the tiredness, its given her motivation and helped keep her body and mind as well as her kidney and pancreas healthy. It is way to pay tribute to her donor and all those who assisted her during her transplant. It has shown her that you can reach your dreams one day at a time with commitment and ambition. Sonia was awarded the “Order of Merit in Social Responsibility DONATES BOGOTA” to honor her commitment to promoting organ and tissue donation. When someone congratulates her, she proudly announces that she is “FIT FOR LIFE”