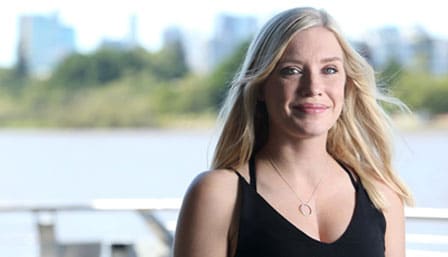 Born with congenital heart disease and Pulmonary Hypertension, there were always limits around what Kate could do. After a cardiac arrest at 24, Kate was considered a high risk of sudden death, and yet it was then that she decided to become a triathlete. Being active has always been important to Kate, and kept herself as fit as possible pre-transplant by swimming, and walking.

When Kate received her second chance at life she refused to take even one second for granted. As soon as she was able, Kate began to train for her dream of competing in and completing her first triathlon. Training started slowly by walking twice a day to build strength and confidence, gradually her daily walks became longer and started to included hills. Finally, at age 27 Kate had concord all odds and learnt to run!

At just two and a half months post transplant, Kate signed up for a 5km walk that would cause her to fall in love with the sport and bring her one step closer to her dream. At three months post transplant, Kate was able to get back into the pool and began her swimming training. Kate participated in an ocean swim before reaching the six month post transplant mark. To celebrate her 3rd Transplant-anniversary, Kate competed in the Cairns Half Ironman (1.9km swim, 90km bike, 21.1km run). And by doing so became the first female transplant recipient to compete in an Ironman event in Australia and the first double organ recipient to compete in an Ironman worldwide.

In addition to competing in triathlon and running events, Kate is an ambassador for the Cycle of Giving (an annual charity ride raising awareness for Organ Donation), a proud member of the Queensland Transplant Team (having competed in two Australian Games), and regularly tells her story to school and sporting groups to both inspire and motivate others to achieve more than they thought possible. It is Kates passion to showcase what is possible post transplant through a fit and active lifestyle.