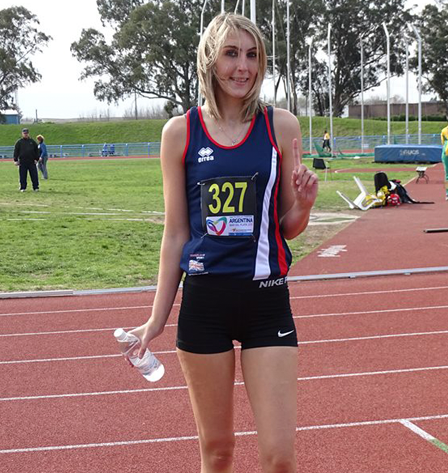 Emma Hilton is a heart transplant recipient of 14 years. Post transplant she was told that the two main issues facing young people after transplantation were: non-compliance of their drugs and a lack of exercise due to a misunderstanding of the benefits of sport on transplanted individuals. Great Ormond Street Hospital introduced her to the British Transplant Games. A year after her transplant, she had won her first gold medal in the 25m freestyle. Since then, the British Transplant Games has been a big part of her life. It has provided her with a platform to show the success of organ donation and the camaraderie between athletes, resulting in lifelong friendships and support networks.

She has been selected to compete at every World Transplant Games since 2007, Thailand. The introduction to this opened her eyes to the success of transplantation and that anything can be achieved. She takes her sport very seriously and trains three times a week on the track with some amazing coaches.

In 2008, Emma was awarded Ambassador of Sport in Harrow and more recently has been short listed for an award for the 2016 sporting achiever of the year.

After leaving school she went to St Mary’s University in Twickenham to study Sport Science. Sadly at the beginning of her final year she was diagnosed with Lymphoma and was too unwell to continue her studies. Complications following chemotherapy meant that she unable to eat and had to be fed intravenously for almost a year. When she recovered she went back and graduated in Health and Exercise and Sport Science with a 2:1.

Following her treatment it took a while for her to regain her health but she was determined to return to training and slowly built up her stamina and has been training three times a week ever since. As a result her health improved and she was able to push her body to levels she never thought she could and achieve personal bests in track events. In 2015 she managed to accomplish her dream of winning triple gold in the 100m, 200m and 4x100m relay in the World Transplant Games in Argentina.

“ The Fit for Life programme is key and even though problems can arise following transplantation with the right attitude and determination obstacles can be overcome. “