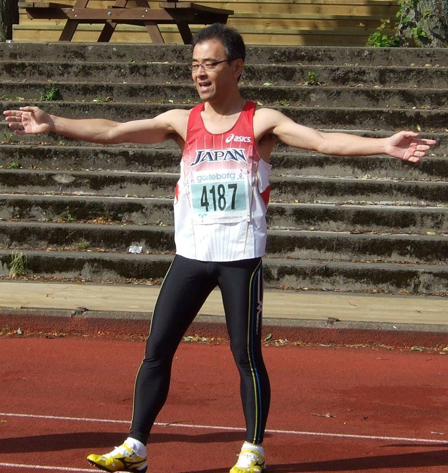 On April 15, 1998 Hitoshi received a kidney from his mother and began a new life, he was 17 at the time. The sickness that had removed his ability to play sports was suddenly gone from his life and he was once again able to be active.

He started to exercise in an effort to rejoin society; this began with jogging to build stamina. At 17 he began exercise and follow a diet and after 13 years when he turned 30, he found his body could no longer easily retain its strength. It was then that he first encountered the World Transplant Games and the first games he participated in were the ones held in Kobe, Japan in 2001. Following that, he has participated in every Games up to 2015 with the exception of the games held in South Africa. The desire to compete kept him training and helped him regain his strength.

After 2001 games he started playing tennis every week with his friends. He currently goes to tennis school weekly, runs races (Tokyo Marathon/Shonan Marathon) and regular 10km races, and participates in other kinds of exercise to keep in shape.

Hitoshi was hesitant in adding muscle mass, as he understood that initially after an organ transplant, creatinine values rise in the body. Advice from a local Professor reassured him that if there is not problem with kidney functionality, then a rise in creatinine levels should not present any problems. This motivated him to get active.

Hitoshi has been involved in the management of the National Transplant Games in Japan and is active in promoting organ transplantation through sports to as many people as possible. He continues to exercise regularly and look after the gift he has been given.