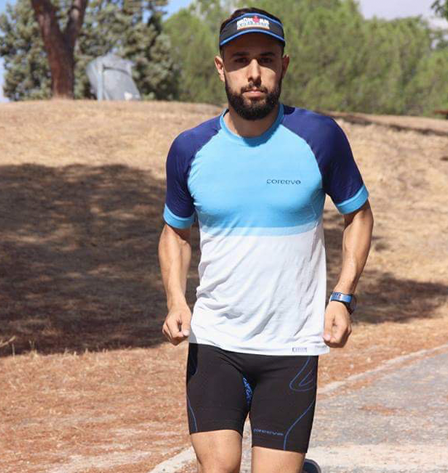 Since a child, sport has always been a big part of Fran Sanz’s life, he was always running, jumping, playing, and competing. In 2006, at the age of 17, he was diagnosed with glomerulonephritis interstitial. It was a huge blow to receive the news and even more having to go through dialysis at such a young age. These challenges, however, helped develop his character and the endurance to overcome difficulties. During this time he never stopped playing sports and exercising.

His best days were those when after dialysis he would participate in sports. He received his kidney transplant when he was 20, and after some difficulties, he was finally healthy and able to set some goals. Fran Sanzs decided he was going to finish an Ironman Triathlon. He began training, with a lot of care, listening to his body, and improving day by day. He soon fell in love with triathlons. Fran Sanz thought the Ironman would be a long-term goal, but in 2015 the first ever Ironman event came to Madrid, is hometown, and he had to participate.

September 27th 2015 was the day that he swam 3.8 kilometers, cycled 180km and ran 42km, becoming the youngest transplant recipient to finish a Full Distance Ironman. “It was the biggest tribute that I could pay to my donor, his or her family, the Spanish public health system and to the entire Spanish society.”

Fran Sanz believes that being able to conquer this goal was not the end, but an extraordinary stage of his athletic life that has shown him that he is capable of challenging himself to even higher levels. “Recipients are experts of falling and rising stronger, it’s part of our life and we have to embrace it.”

Fran Sanz believes it is his responsibility and duty as a recipient to promote the message of donation. He aims to be an inspiration through his sports to patients who are waiting for a transplant, in order to show them that an extraordinary life lies ahead. “I’m a recipient without limits! True success is not crossing the finish line, it’s the everyday fight on the way to accomplish our personal challenges.”