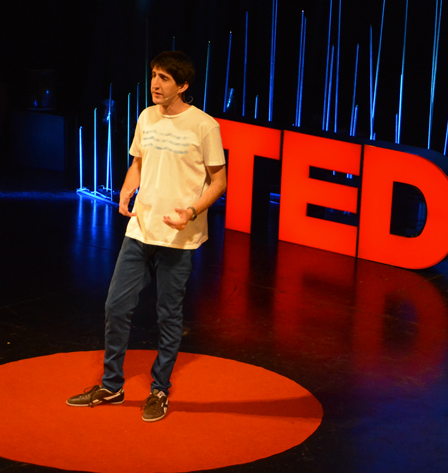 Cristian received a lung transplant due to cystic fibrosis, a chronic genetic disease for which he had always been under intensive treatment. He found in sports a tool to care for himself, be a role model and at the same time spread awareness on organ donation and Cystic Fibrosis. Cristian is a swimmer and part of the Argentine National Team, was a medalist in the 2013 and 2015 World Transplant Games, and participates in Open Water competitions with conventional swimmers.

Cristian is a Kinesiologist by degree, and specializes in Child Neuro-rehabilitation. He currently serves as President (and Founding Partner) from Cordoba CF Foundation, Delegate for the Province of Córdoba in the Transplanted Sportsmen Association of Argentina (A.De.TRA), and is a Member of the Rotaract Club Alberdi.

Cristian has been a Global Shaper for the Cordóba Hub. The Global Shapers Community is a network of Hubs developed and led by young people who are exceptional in their potential, their achievements and their drive to make a contribution to their communities.

Cristian was selected as one of the “10 Outstanding Young People of Córdoba” in 2015 by the Chamber of Commerce, and was a Speaker in 2015 TEDxCordoba with “Todos estamos en lista de espera” (We are all waiting list ).

With their initiative and work, they achieved the creation of the “Program of physical activity and sport for transplant people and those on the waiting list” agreement signed by the entities of sport and health of Córdoba, Argentina. Cristian remains fit and active through his participation in swimming and uses this to reach out and engage with others.